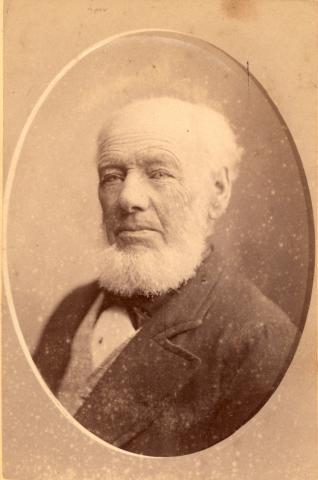 Photo courtesy Miriam Nicholson
This photo was probably taken in the 1870s or early 1880s.

The versatile English businessman James Penny Nicholson (1796-1885) – linen draper, shipbuilder and timber merchant – was born at Burton-in-Kendal in Westmorland but moved to the city of Lancaster as a young man to pursue his business interests, marry twice and father eight children.

After serving two apprenticeships with drapers at Ulverston in Lancashire and London, he opened his own shop in Cheapside at the age of 22, a business that prospered but from which he retired at the age of 40 after the death of his first wife, Agnes Holme, and marriage to his second, Anna Wane.

Having observed shipbuilding in Liverpool in 1836, carried on by Leonard Simpson, Anna's uncle, he used proceeds from his original business to open a ship carpentry yard at Glasson Dock near Lancaster on land leased from the Port Commissioners, whose ranks he was to join for 13 years.

There, in partnership with Daniel and Matthew Simpson (sons of Leonard), he built more than a dozen different canal boats and small coastal vessels of up to 350 tons, rejuvenating Lancaster's former shipbuilding industry.

He moved to a house at Thurnham Terrace near his graving dock (used for ship repair) and, as a committed Christian, provided money and materials to build an Anglican church for his workforce of 30 – Christ Church – beside the Lancaster Canal towpath.

However, by the early 1850s there were signs of a lull in his industry and he made the decision to emigrate to Australia to try to find a better life for his younger sons, leaving his ship building and repair business to be carried on by Matthew Simpson (Daniel having emigrated to New Zealand).

His eldest son, James Holme Nicholson (1824-1901), remained in England since he was married with a child and had a promising career at what later became the University of Manchester (as its first Registrar).

The next two sons, Thomas Christopher and Henry Molyneux Nicholson, aged 20 and 18 respectively, set off for Adelaide before the rest of the family, but Thomas died there of dysentery less than three months later while his parents were still at sea.

As Victoria's gold rush continued, they settled in Geelong where a timber business was opened in Ryrie Street operated by J. P. Nicholson and sons, lasting from about 1856 until 1871.

The family went to live in Melbourne about 1873 and James Penny Nicholson died on August 14, 1885 at the Elsternwick home of his son Henry, called 'Lunebank' in memory of the River Lune which ran through Lancaster.